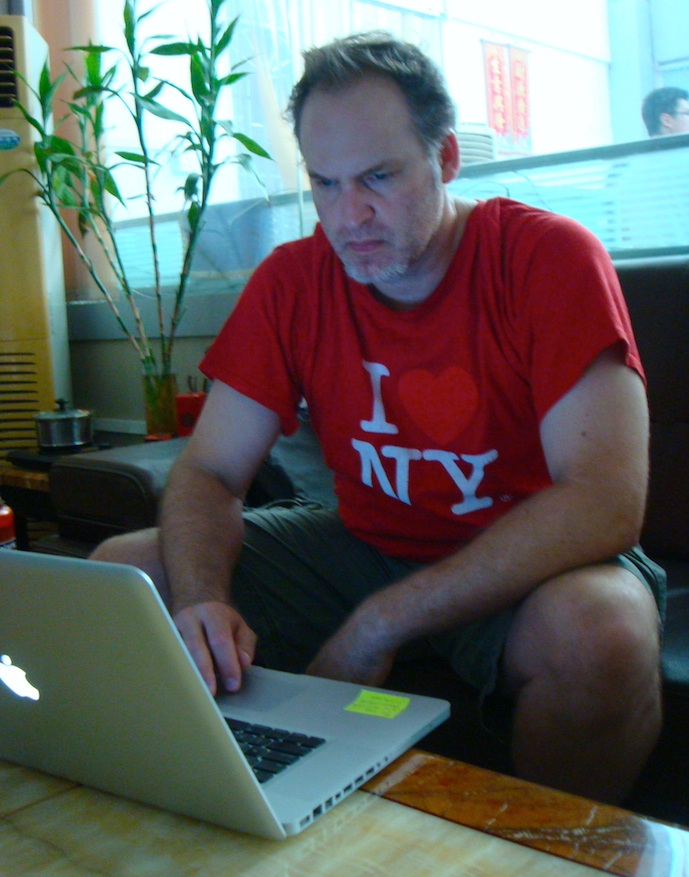 I can be pretty hard on myself. I work long hours and I don’t spend a lot of time admiring the things I’ve accomplished. No matter how good things are, I always assume they could be better. It drives the people around me crazy, but… it’s totally worth it.

If you’ve read Meet the Inventor, you know that launching Three Minute Egg ® was waaaay more involved than I ever could have predicted. Sustaining it is exponentially moreso. Fortunately it is also more rewarding. My two most challenging hurdles were: moving my manufacturing back to The United States; and creating a fully biodegradable Yoga Egg. I’ve done them both! In the process I have reduced my carbon footprint significantly. Here’s how it all went down.

The Straw That Broke the Yogi’s Back

It hit me like a ton of yoga bricks one afternoon while I was leaving China: I could no longer deny it; I had become a part of the problem.

I’d spent the previous 6 weeks sweating my sitting bones off in the Egg factory, side-by-side with a slew of workers whose lack of education afforded them few better options. They were nice enough to me, but they didn’t love the project. I’m pretty sure one of them showed up to work drunk (at 7:00 am). Two of them had mastered the illusion of "getting it," but they didn’t. Every afternoon I’d show them how to fine-tune their technique, and every morning I’d return to find they’d invented new ways to fail. Was the job too complicated? Were they being underpaid? Or did they just not care? The facts didn’t matter. I was paying the price either way. Each day I arose, hopeful, and each night I went to bed feeling defeated.

But Are They Good Enough for Me?

A foam mist obscured the air like a dust storm at Burning Man. Seven colors of particulate, beautiful in isolation, melded together, blanketing every surface in an unfortunate brown. Each step I took on the unfinished concrete kicked up a gnarly gray cloud. Strewn about the factory floor were piles of discarded sandpaper — evidence of the labor it took to tackle a job interminable. It would have stayed that way forever had I not one day tripped over an untrimmed piece of rebar in the floor, camouflaged like a landmine. I decided it was time to clean up. I thought that by doing so I was setting an example for how much more productive they could be and feel in a clean space; but my engineer/liaison/friend chastised me: the only thing I was teaching them was to make as a bigger mess tomorrow because I would clean it up for them.

By the end of my tenure we’d created a decent batch of Eggs. For the first time since launching my product, the results were reasonably consistent. It wasn’t quite good enough for me, but it was good enough for the time being. The trouble was that my omnipresence would be required if this level of mediocrity were to be maintained. If this was to be the new standard, I would have to supervise every production run indefinitely. This was no way to run a business and it was no way to live a life. Six weeks of inhaling a toxic cocktail of cigarettes, concrete and foam just wasn’t worth it. I needed to find a better way to make Yoga Eggs and I wanted to make the Yoga Eggs better.

The Dark Night of My Egg Soul

It all came crashing down during the ferry ride from Mainland China to the Hong Kong Airport. I passed quarries, docks and trash-ridden shores. It looked bleak and hopeless. But the thing that struck me the most were the scores of scattered boats, anchored offshore, blackened by pollution and neglect. Laundry hung from the masts and smoke rose from the chimneys. People were living on these decrepit crafts, eating from these polluted waters, and drinking… I don’t know what they were drinking. Companies like mine exploited their land for cheap goods and services, and the byproduct of this industrial complex made its way downhill toward the sea. This trickle-down economics model was failing, hard.

I became paralyzed by the irony of manufacturing healthy-living products under such inhospitable conditions. The desires of my comparatively small and privileged populace were being met at the expense of human beings whose most basic needs were being trampled upon with wanton apathy. My factory burned its own coal to provide power to their machines. Women in the nearby town square market minced fish from an adjacent body of water. Waste-deep in the same pond stood a man washing his dishes and body. The trough in the public restroom drained into this same pool. It was shared by an expansive community of farmers who dwelled in thatched huts floating amongst community gardens that rose from the aquifer. 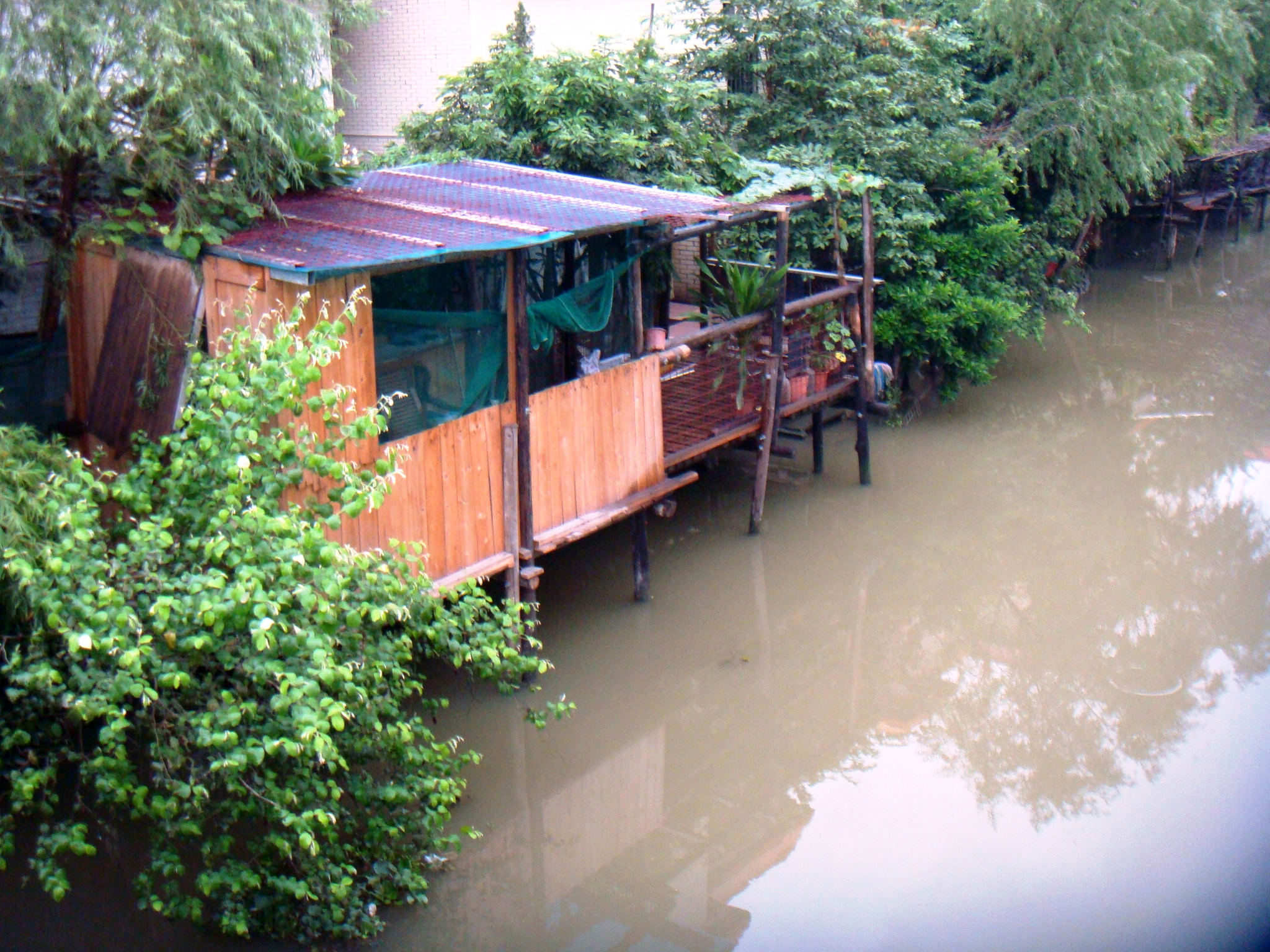 I wanted to make a change, but I was in an unwinnable battle against a tsunami of group consciousness. Logic was on my side, but I was outnumbered a billion to one. Something had to give. If I couldn’t change the mindset of a dozen factory workers, what would it take to change the mindset of an entire continent? I looked for something I could change and only one thing came to mind — I could change the country where I made my Eggs. Thus began an ardent search for US manufacturing and the ultimate launch of an Eco-friendly line of yoga products.

Where Are We Now?

When I set out to make Eggs in America, it never occurred to me I could make them so close to my house. The first company to approach me was lodged in the inland empire of Los Angeles, California. Ironically the product would be produced by a sister company in central North Carolina — my home state! So I was put in touch with them directly and now instead of flying 20 hours to oversee production and answer questions, I could drive two hours including a midway stop at Starbucks. The family who owns this rather impressive operation have become my friends as well as my business partners. They care about me, they care about my product and they care about doing the job right. The ability to communicate directly with the factory owner in English is a luxury I might take for granted were it not for the many years I spent lost in translation.

What Does it Mean to be Eco-Friendly?

This depends on whom you ask, and what they want you to believe. For me, in order for something to be Eco-Friendly, it has to at least meet the following criteria:

I’d love to make my Eggs out of vegetable matter, and if you know of such an option, please tell me about it! But in the meantime… first and foremost the product needs to last. In the case of my Yoga Eggs, the most fitting material is a cross-linked polyethylene foam. This foam is both supple and durable. It’s comfortable to the touch and easily manipulated into the right shape and size. It is impervious to solvents and it stands the test of time. But there’s one problem with cross-linking two different materials to make one final product — it cannot be easily recycled. There is a patent pending for a very complex process that would allow for some recycling of this foam, and I hope it happens. But at present, I don’t believe it’s being done; or if it is, it’s on a very small scale.

This increases the likelihood that anyone selling EVA products “from recycled materials” is probably green-washing the truth or worse. They may be gluing together offcut sheets of material that are left over from other projects, but it’s not likely that the foam itself was melted or ground down and re-formed to create the object you hold in your hand today. Believe me, I wish it was different! Not only isn’t this foam being recycled, but in order for something to be recycled, it has to get to the people who actually will recycle it. Foam is light, but bulky. it would probably cost more money and resources to transport it than the environment would receive benefits from recycling it. 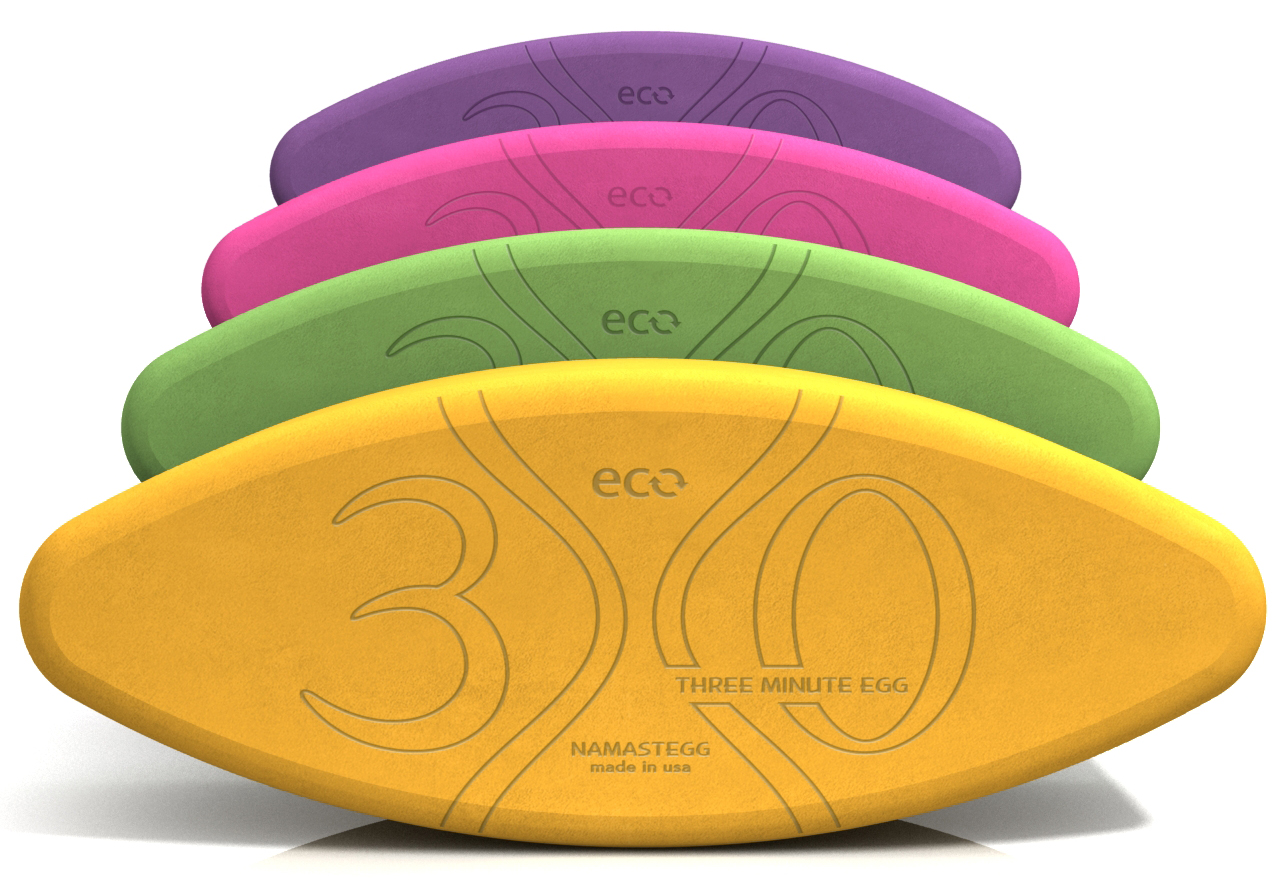 So how was I to overcome the hurdle of going green without sacrificing quality? I teamed up with the right people. My US manufacturer has aligned itself with an ECO-conscious foam fabricator. This fabricator purchased an exclusive license to a patented additive that makes the foam used for my Yoga Eggs biodegradable. It can be seamlessly mixed into the material in such a way that it lasts just as long on your mat, but biodegrades more quickly in a landfill setting. By attracting specifically the kinds of microbes that make landfills their home, 3 Minute Egg foam products are engineered to break down quickly and efficiently, turning back into fertile soil.

As we move forward, we are replacing all our non-ECO products with biodegradable foam. You can see these products in the “ECO” section on our website and you will know you have one of these biodegradable Eggs in your hands when you see the ECO logo stamped near the top of the hourglass. It’s been a long time coming, but I am extremely proud to have made this quantum leap into greener pastures.

100% of my Yoga Eggs are now made within a 5-hour drive of my warehouse. The people who make them share my convictions for a greener world. Gone are the days when my Eggs traveled literally halfway around the world on a ship, and then were driven several hours to reach their destination. Now they never have to leave the state! (That is until you order some for yourself. :-))