As some of you may already know, BKS Iyengar left the physical body on the 20th of August in India. Mr. Iyengar was one of the most influential yogis of all time, and is personally responsible for what most of us view as proper alignment in the physical practice of yoga. He wrote countless books, and dedicated his entire life to further understanding the human body and how yoga can cure its many ills. He also wrote in great detail about some of yoga’s more subtle and abstract philosophies. His book Light on Life is a work of prose that reads like a beautiful poem. 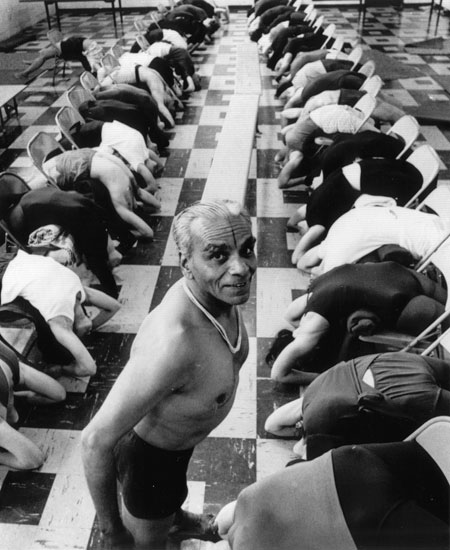 “Live before you die, so that death is also a lively celebration.”
-Guruji, B.K.S. Iyengar (from Light on Life)

I have had the good fortune to meet and study with many Iyengar Yoga teachers. I always leave the room feeling better than when I arrived, and having achieved something in my practice of which I would not have thought myself capable. In January 2012, I spent the better part of a month in Pune, India, thanks to the support and recommendation of my good friend and mentor, Joan White. It was one of the most evolutionary experiences of my life.

Mr Iyengar invented the concept of using props in yoga, and were it not for him, I would never have been led to develop the Egg. So, the fact that I’m writing to you now is directly attributable to his influence. Such is the work of a truly great teacher.

My gratitude goes out to Mr. Iyengar for a life of dedication and integrity, to all who continue the work he began, and to all of you who have become pillars of support as I live my dharma through what has become my yoga.

Joan White is certified by BKS Iyengar at the Advanced level and has been studying with the Iyengar family since 1973. To learn more about Joan or to see her full teaching schedule visit joanwhiteyoga.com.

If you’d like to read my blog series, which chronicles my trip to India in 2012, it can be found here on the 3ME blog under the tag A Yogi Abroad.