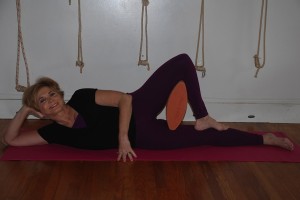 Recently I had the opportunity to catch up with much beloved Iyengar Yoga instructor, Joan White, for an interview about her life as a yoga teacher and 3ME Signateur. What a privilege this was! Joan is one of the most senior Iyengar yoga teachers in the U.S., having studied with the Iyengar family since 1973. She is winding down her 2011 tour, which included India (twice), South Africa, Germany, Denmark and numerous cities across the U.S. With just a couple weeks before her last workshop of the year, Joan afforded us this opportunity to learn more about her. 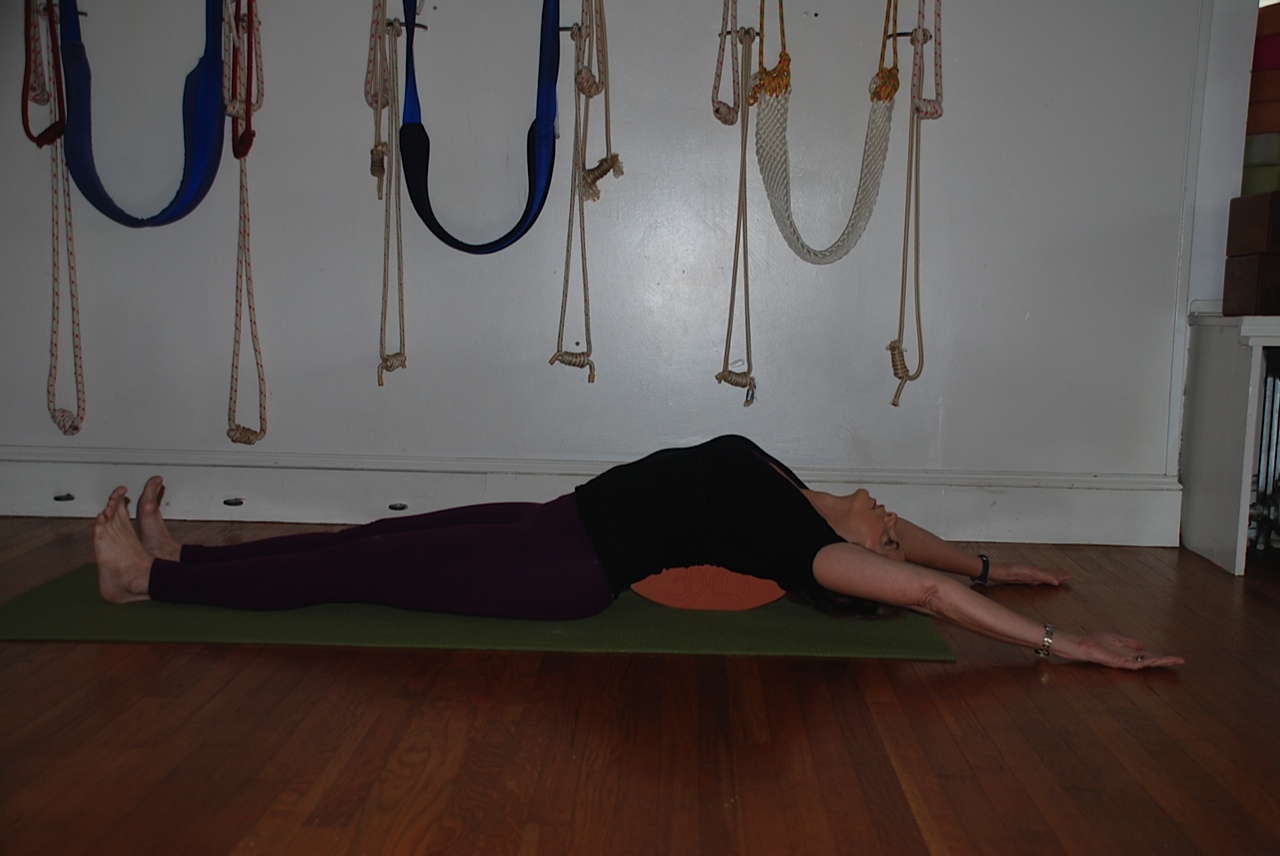 3ME: Great to catch up with you, Joan. Tell us, in the midst of your global travels and experiences, how did you first encounter the Eggs?

Joan: Well, it was a windy day in the hot sands of Joshua Tree, California, at Bhakti Fest when I was assigned to teach yoga in an outdoor tent with a dirt floor to an Iyengar yoga class. The only thing between my students and the coarse sand was their yoga mat. Little did I know that there were Three Minute Eggs being sold only 50 yards away from where I was teaching.

3ME: As one of our 3ME Signateurs, which yoga pose(s) have you found the Eggs to be most beneficial for?

J: My most favorite thing to do with the Eggs is still to lay over them and open my back. Since 1973 I had been using wooden blocks to do this, but as I have grown “wiser” they’ve become painful on my somewhat damaged spine. The pain of the blocks forced me to miss out on the great gift of supported back-bends. By contrast the Eggs are kind to the spine. They do the job with pleasure instead of pain. I use them in three or four different combinations on a regular basis, and I’m back to feeling my younger self.

I also love to use them in Adho Mukha Svansana (Downward Facing Dog Pose) under my wrists to stop myself from sinking as well as using an Egg under my head to bridge the gap between me and the floor.The tapered shape of the Egg offers a graduated ease onto the floor so I can start at the highest point and work my way down until there is no Egg left at all.

I work with an Egg under my front foot in Utthita Trikonasana (Triangle Pose) to protect my knee while increasing my extension. The Egg offers a huge contribution under my heel in Virabhdrasana I (Warrior Pose) – where maximizing the extension is brought by pressing into the heel. In fact I have found many useful ways of working with the eggs in most of the standing poses.

There is no end to the possibilities with these Eggs, and every day I look forward to discovering something new. Today I was working on Ustrasana (Camel Pose) and spontaneously wedged them between the backs of my thighs and my heels – a great way to improve the extension.

3ME: As one of the most senior Iyengar yoga teachers in the States, it’s incredible the personal relationship that you have developed over the years with BKS Iyengar himself. Can you tell us a little more about your first yoga class with him?

J: My first class with Guruji was in April of 1973 in Ann Arbor Michigan at the Ann Arbor Y. There were 40 of us in the class, and we met in one of the gyms at the University of Michigan. I had already had dinner with him the night before so he knew who I was and that I was healing from a nasty broken back. He put me at the front in the center so he could “watch me.” I was awed by his presence, his clarity, and his ability to communicate with everyone at the same time no matter where he was in the room. I knew something about teaching skills and I had never been in a classroom with someone so quick to capture the students. At all times he kept us totally engrossed, not just in the general sense, but from moment to moment, so that while in class with him there was nothing else but the yoga we were doing.

3ME: I understand that you first turned to yoga when you broke your back during a horseback riding accident. What motivated you to get back on that horse?

J: I started yoga in 1968 and had my first horseback riding accident in 1972 and the second big one in 2005. I got back on horses because I don’t like to live my life in fear. I enjoy riding and wish I had a better relationship with horses. Still if I had a chance to ride a nice gentle horse, I would get back on and ride.

3ME: What was your “a-ha” moment when you turned to yoga?

J: I knew almost immediately that this was the teacher [BKS Iyengar] that I wanted to study with. It wasn’t just his charisma but his insight which got to me. At one point we were asked to do backward bends over a chair. As soon as I tried to bend backwards I experienced searing pain in my back, and before I could even respond he was there and took me up saying “with pain like that you aren’t ready to go backwards.” How he knew and how he moved so quickly I don’t know, and he will only say “it was God’s grace.”

3ME: Working one-on-one with Iyengar has surely created the strongest foundation possible in the Iyengar yoga tradition. What is the greatest gift you have taken from your practice with him over the years?

J: This is hard to answer because I can think of so many things but if I only had one thing I would say compassion. If I had two I would say; find a way but don’t give up.

3ME: In your travels in the past year, which was your favorite workshop, teacher training or conference that you participated in?

3ME: As yoga has popularized over the last few decades, I’m sure you must have seen many changes traveling from India to practice with the Iyengar family back into the U.S. and the more “mainstream” version, if you will, that you find here. How would you describe yoga in India versus yoga in the West?

J: I can only speak about the Iyengar system as I don’t study other forms of yoga, especially in India. The classes in India are faster, and there is no room for complaints or whining. Their aim is to teach yoga and not to necessarily please the public. They don’t view yoga as a business, but as a serious study. They don’t compromise for public opinion.

3ME: Which values are those that you hold the highest as your practice and teaching has evolved over the years?

J: Be true to yourself. Stick to it and find a way to make it work. Keep the integrity in what you are doing. Work hard. Don’t worry about rewards, just do for the sake of doing.

3ME: Although your schedule always has you on the run, there must be several places you have enjoyed your personal practice. Out of them all, where is your favorite spot for your daily practice?

3ME: How do your students describe your teaching style?

3ME: As time goes by it seems as though yoga is only increasing with popularity, with new people trying it out each day. What is your advice for someone that is new to yoga, particularly someone who has suffered from injuries and/or joint issues?

J: Stick with it and let go of your ego, and you won’t be sorry.

3ME: Iyengar yoga strongly advocates the use of yoga props. How do you prefer to include them in your teaching?

J: I use props in two ways and they are not mutually exclusive. First I use them to enable someone to do something that it wouldn’t be possible for them to do without some form of help. Second I use them to teach something in a pose.

3ME: You have one workshop left on your tour this year at Clear Yoga in Rhinebeck, NY, in just a couple weeks. What’s next for you in the new year?

J: More teaching and teacher training. More traveling outside of this country. I am working on the ethics committee for IYNAUS and will continue doing that as well as being a consultant for Yoga Samachar, the publication that comes from our national organization Iyengar Yoga National Association of the United States. I may write more but so far don’t really have time to do it. I am a wife and a mother and a grandmother so I have lots to do that isn’t always yoga related.

3ME: Is there anything else you’d like people to know?

J: While I remain true to the roots of my Iyengar tradition, I’m also a bit of an Eggsprimentalist. Fortunately I don’t feel obliged to choose one over the other. In fact, I now have my own Signature Egg in the Pink Adobe color, and Jason ships them to all of my workshops. Jason and I have collaborated on some designs for the next generation of Eggs, and I’m excited to see how they turn out.